My NCTT colleague, Trung Nguyen, recently announced a prototype chemical substructure search system based on fingerprint pre-screening and an efficient in-memory indexing scheme. I won’t go into the detail of the underlying pre-screen and indexing methodology (though the sources are available here). He’s provided a web interface allowing one to draw in substructure queries or specify SMILES or SMARTS patterns, and then search for substructures across a snapshot of PubChem (more than 30M structures).

It is blazingly fast.

The figure below shows the distribution of hits matching the query and the time required to perform the query (on the server) for the 1000 substructures. Clearly, the bulk of the queries take less than 1 sec, even though the result set can contain more than 10,000 hits. 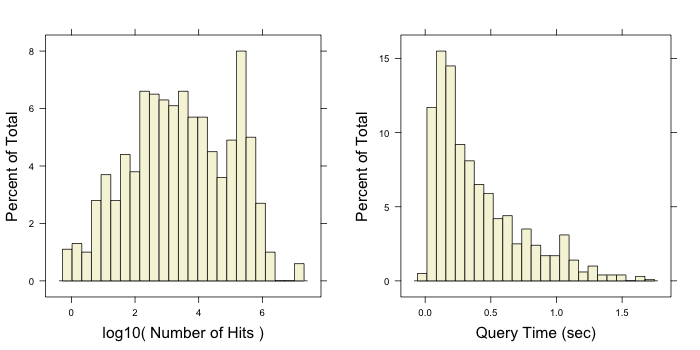 The figures below provide another look. On the left, I plot the number of hits versus the size of the query. As expected, the number of matches drops of with the size of the query. We also observe the expected trend between query times and the size of the result sets. Interestingly, while not a fully linear relationship, the slope of the curve is quite low. Of course, these times do not include retrieval times (the structures themselves are stored in an Oracle database and must be retrieved from there) and network transfer times. 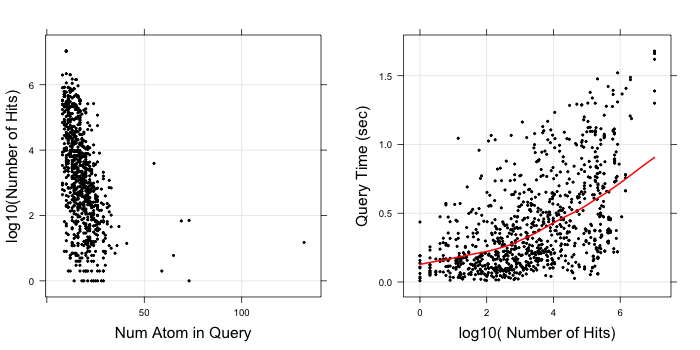 Finally, I was also interested in getting an idea of the number of hits returned for a given size of query structure. The figure below summarizes this data, highlighting the variation in result set size for a given number of query atoms. Some of these are not valid (e.g., query structures with 35, 36, … atoms) as there were just a single query structure with that number of atoms.

Overall, very impressive. And it’s something you can play with yourself.