Andrew Dalke recently published a detailed write up on his implementation of the Pubchem fingerprints and provided a pretty thorough comparison with the CDK implementation. He pointed out a number of bugs in the CDK version; but he also noted that performance could be improved by caching parsed SMARTS queries – which are used extensively in this fingerprinter. So I wanted to see whether caching really helps.

The CDK SMARTS parser is a JJTree based implementation and my anecdotal evidence suggested that SMARTS parsing was not a real bottleneck. But of course, nothing beats measurements. So I modified the SMARTSQueryTool class to cache parsed SMARTS queries using a simple LRU cache (patch):

The map is keyed on the SMARTS string. Then, when we attempt to parse a new SMARTS query, we check if it’s in the cache and if not, parse it and place it in the cache.

Now, the thing about this caching mechanism is that after 20 SMARTS queries 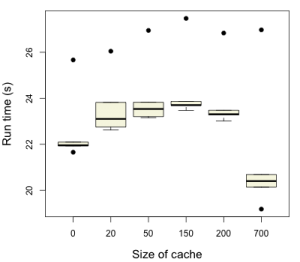 have been cached, the least recently used one is replaced with a new one. As a result, if we perform matching with 40 unique SMARTS (in sequence) only the last 20 get cached, for a given molecule. But when we go to do it on a new molecule, the first 20 are not in the cache and hence we shouldn’t really benefit from the caching scheme. In general, if the fingerprinter (or any caller of the parser) will perform N unique SMARTS queries for a single molecule, the cache size must be at least N, for the cache to be used for subsequent molecules.

I implemented a quick test harness, reading in 100 SMILES and then generating Pubchem fingerprints for each molecule. The fingerprint generation was repeated 5 times and the time reported for each round. The box plot shows the distribution of the timings. Now, the CDK implementation has 621 SMARTS patterns – as you can see, we only get a benefit from the caching when the cache size is 700. In fact, cache sizes below that lead to a performance hit  – I assume due to time required to query the map.

While the performance improvement is not dramatic it is close to 10% compared to no-caching at all. In actuality, the major bottleneck in the SMARTS parser is the actual graph isomorphism step (which we hope to drastically improve by using the SMSD code). Maybe then, SMARTS parsing will take a bigger fraction of the time. Also keep in mind that due to the heavyweight nature of CDK molecule objects, very large caches could be a strain on memory. But to check that out, I should use a profiler.